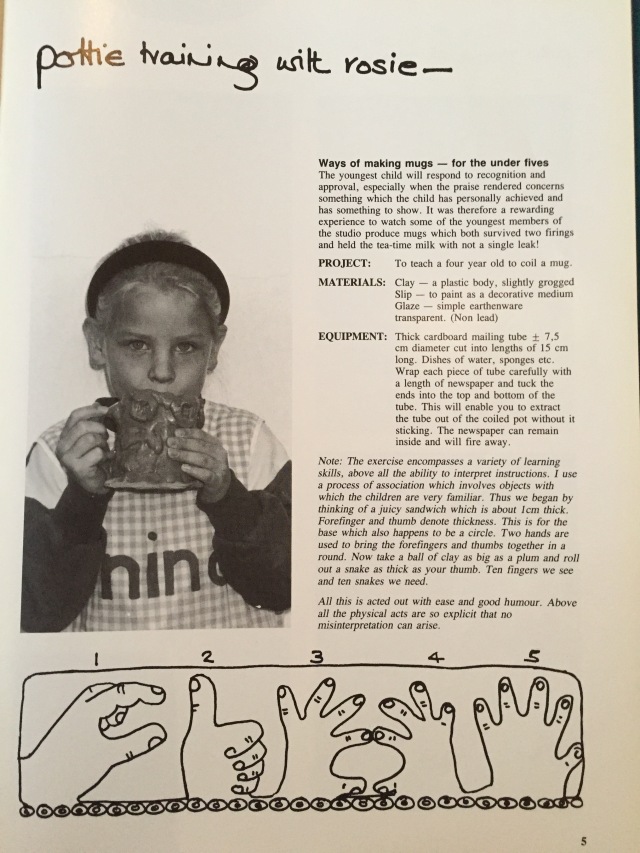 Looking back at Rosemary’s unique view on form, functionality and the fine line between art and craft

Rosemary Lapping Sellars has made an ongoing and valuable contribution to South African Ceramics.  As a brief introduction I am drawing from the source available to me to understand the foundation of her approach.

With wisdom and heart, Rosemary Lapping Sellars has shared her knowledge of the art and craft of ceramics generously. In the NCQ; (National Ceramics Monthly), organ of APSA (Association of South African Potters) which was published and edited by Michael Guasardo Rosemary wrote under the titles  ‘ Personally speaking’ and ‘ pottie training with Rosie’.

She addressed a wide range of topics.

In one article titled ‘From behind the ironic curtain’ she posed the question: “Is it not ironic that we clay people still have a problem with identity?” going further to say “I feel the reasons for this are so deeply imbedded that it is almost impossible to assess them directly.”  Claiming that “The modern potter and ceramist still has to find a ‘place of belonging’ in the modern world, especially when exposed in the open market where there is an air and the fear of false reason.” Quoting Hans Coper who in 1969 wrote: “Practising a craft with ambiguous reference to purpose and function, one has occasion to face absurdity.  More than anything, like some demented piano tuner one is trying to approximate a phantom pitch”.

Rosemary has, in my opinion, ‘perfect pitch’. She has, in my view, a perfect understanding of the thrust of a ceramic piece. Quick to endorse the maker’s intention she confidently explores that ever explosive edge between the functional and non functional vessel, sculpture and ornament. Mentioning a joke amongst potter cynics “What is the difference between a jug that you pour from and a jug you pore over? The answer being 300 pounds and one thousand pounds.” A question of value?

A frequent traveller who had lived in the UK for many years, Rosemary published her ‘pottery itineraries’ through Holland, the UK, Ireland and Spain.

‘Kids love clay – be it the plastic-ability, the shape ability or the squelch-ability – who knows?  A child with clay is a happy one.  I have been totally involved with the child since my own twenties informed me I was one no longer. I have worked with children since I graduated with a child psychology major and have used the medium of clay for its therapeutic, artistic and creative value – acknowledging beyond a shadow of doubt that children need an alternative language to their verbal skills.  Long before a child can speak he is learning through his senses and thus all activities which draw on sensory experiences are crucial to a child’s healthy development.

Rosemary proposed and published a structured series of articles and exercises drawn from her teaching experience which would be as valid today as in 1990s.

The existential question of who Rosemary is a profound study for another day.  Today we are reaching back into her past to establish some of the foundations of her thinking.

This entry was posted in Uncategorized. Bookmark the permalink.